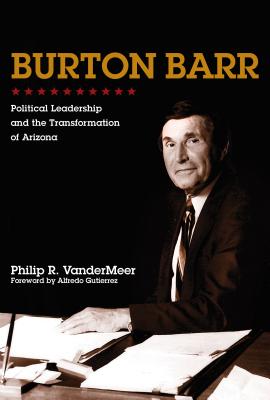 Burton Barr: Political Leadership and the Transformation of Arizona

Politics, like poker, requires timing and risk, and Burton Barr of Arizona knew it. The deal maker of Arizona politics would say, "You gotta know when to hold them." For more than two decades, Barr played his political cards with skill as he led Arizona through an era of enormous growth and success.

Considered perhaps the most influential person in Arizona's political development, Burton Barr represented north central Phoenix in the Arizona House of Representatives for the twenty-two years from 1964 to 1986. As the Republican House Majority Leader for twenty of those years, he left his fingerprints on every major piece of legislation during those decades, covering such issues as air pollution, health care for indigents, school aid, the tax code, prison reform, child care, groundwater management, and freeway funding.

Burton Barr's political life unfolded during the very time his state and region shifted from being outliers to trendsetters. His choices in policy making and his leadership style were both an outcome and a creator of his sociopolitical environment. Arizona politics in the 1960s and '70s was a rich brew of key elements, a time when the economy was being transformed, the nature and distribution of populations shifted, partisan politics were in flux, and the very lifeblood of the West--water--was being contested under increasing pressures of usage and depletion.

How Barr successfully responded to those challenges is the story of Arizona's development during those years. At the heart of it, Barr's political life and personality are inextricably bound up with the life of the West.

Title: Burton Barr: Political Leadership and the Transformation of Arizona

Burton Barr: Political Leadership and the Transformation of Arizona