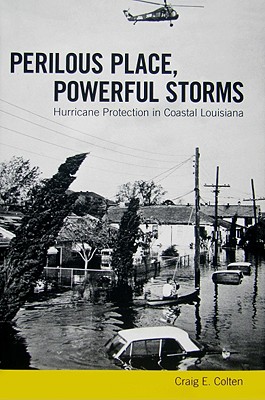 The hurricane protection systems that failed New Orleans when Katrina roared on shore in 2005 were the product of four decades of engineering hubris, excruciating delays, and social conflict. In Perilous Place, Powerful Storms, Craig E. Colten traces the protracted process of erecting massive structures designed to fend off tropical storms and examines how human actions and inactions left the system incomplete on the eve of its greatest challenge.

Hurricane Betsy in 1965 provided the impetus for Congress to approve unprecedented hurricane protection for the New Orleans area. Army Engineers swiftly outlined a monumental barrier network that would not only safeguard the city at the time but also provide for substantial growth. Scheduled for completion in 1978, the project encountered a host of frustrating delays. From newly imposed environmental requirements to complex construction challenges, to funding battles, to disputes over proper structures, the buffer envisioned for southeast Louisiana remained incomplete forty years later as Hurricane Katrina bore down on the city.

As Colten reveals, the very remedies intended to shield the city ultimately contributed immensely to the residents' vulnerability by encouraging sprawl into flood-prone territory that was already sinking within the ring of levees. Perilous Place, Powerful Storms illuminates the political, social, and engineering lessons of those who built a hurricane protection system that failed and serves as a warning for those guiding the recovery of post-Katrina New Orleans and Louisiana.