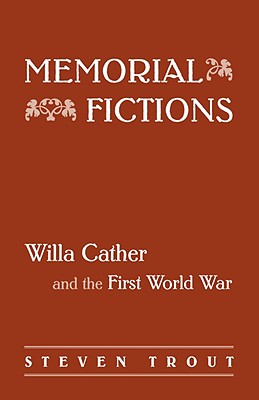 Memorial Fictions offers a major reassessment of Willa Cather's career and artistic achievements, provides a plethora of information on popular culture during and immediately after the Great War, and demonstrates the importance of literature as a cultural forum for addressing issues and ideas fundamental to American culture. Based on extensive archival research and a variety of scholarly sources drawn from several disciplines, Steven Trout shows how Cather's analysis of the First World War in One of Ours and The Professor's House represents a considerable accomplishment, one worthy of standing next to her groundbreaking treatment of Nebraska settlers in O Pioneers and My Antonia and her virtual reinvention of the historical novel in Death Comes for the Archbishop and Shadows on the Rock. Furthermore, he argues that Cather's First World War-related fiction deserves consideration alongside such established classics as Ernest Hemingway's A Farewell to Arms, Erich Maria Remarque's All Quiet on the Western Front, and Vera Brittain's Testament of Youth. Though awarded the Pulitzer Prize in 1923, One of Ours was a frequently maligned and misunderstood book. Contemporary male reviewers reviled the work, and it has been Cather's most neglected novel among later generations of readers and scholars. Trout not only reevaluates the impact of the First World War on Cather's fiction but also demonstrates that One of Ours, far from representing a dubious achievement within the Cather canon, renders the American experience of the war with prophetic insight and considerable imaginative vigor. He also offers a detailed reappraisal of The Professor's House, showing it to be a novel haunted by the phantomlike presence of the Great War. Steven Trout is an associate professor of English at Fort Hays State University. He is coeditor of Literature of the Great War Reconsidered: Beyond Modern Memory.