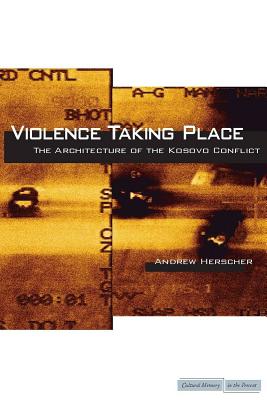 Violence Taking Place: The Architecture of the Kosovo Conflict (Cultural Memory in the Present)

While the construction of architecture has a place in architectural discourse, its destruction, generally seen as incompatible with the very idea of "culture," has been neglected in theoretical and historical discussion. Responding to this neglect, Herscher examines the case of the former Yugoslavia and in particular, Kosovo, where targeting architecture has been a prominent dimension of political violence. Rather than interpreting violence against architecture as a mere representation of "deeper" social, political, or ideological dynamics, Herscher reveals it to be a form of cultural production, irreducible to its contexts and formative of the identities and agencies that seemingly bear on it as causes. Focusing on the particular sites where violence is inflicted and where its subjects and objects are articulated, the book traces the intersection of violence and architecture from socialist modernization, through ethnic and nationalist conflict, to postwar reconstruction.

Title: Violence Taking Place: The Architecture of the Kosovo Conflict (Cultural Memory in the Present)

Violence Taking Place: The Architecture of the Kosovo Conflict (Cultural Memory in the Present)