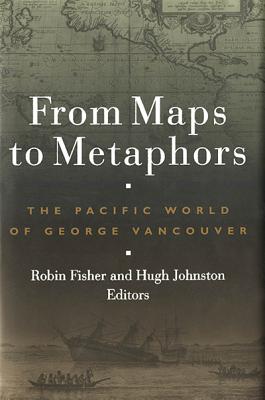 From Maps to Metaphors: The Pacific World of George Vancouver

During the summers of 1792-4 George Vancouver and the crew of the British naval ships Discovery and Chatham mapped the northwest coast of North America from Baja California to Alaska. Vancouver's voyage was the last, and the longest, of the great Pacific voyages of the late eighteenth century. Taking the art and technique of distant voyaging to a new level, Vancouver eliminated the possibility of a northwest passage, and his remarkably precise surveys completed the outline of the Pacific.

But to map an area is to appropriate it - to begin to bring it under control - and Vancouver's charts of the northwest coast were part of a process of economic exploitation and cultural disruption. Although he and the other great navigators of his age exercised no control over the ideas and enterprises spawned by their voyages, their names have come to symbolize the consequences of European expansion - good or bad.

From Maps to Metaphors grew out of the Vancouver Conference on Exploration and Discovery, held to observe the bicentennial of Vancouver's arrival on teh Pacific northwest coast. Its aim is to bring to light much of the new research on the discovery of the Pacific, as well as to illuminate the European and Native experience. The chapters are written from a variety of perspective, and provide new insights on many aspects of Vancouver's voyage - from the technology Vancouver employed to the complex political and power relationships among European explorers and the Native leadership.

While it is no longer possible to 'celebrate' the coming of the European explorers like Vancouver to the northwest coast, their achievements cannot be overlooked. The charts, log books, journals, and specimens from the voyages of Vancouver and his contemporaries are important sources of information essential for the reconstruction of an image of the Pacific region and its peoples in the eighteenth century.

Title: From Maps to Metaphors: The Pacific World of George Vancouver

From Maps to Metaphors: The Pacific World of George Vancouver