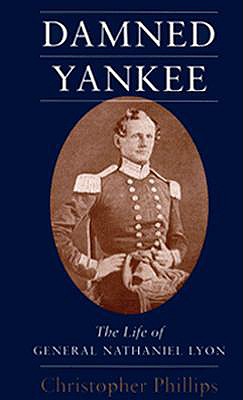 Nathaniel Lyon (1818-1861) was the first Union general to die in the Civil War. Killed at the Battle of Wilson's Creek, Missouri, he became the North's first war hero, famed as the man who saved Missouri for the Union. In Damned Yankee, chosen by Choice as an Outstanding Academic Book in 1991, Christopher Phillips portrays Lyon not as the savior of a border state threatened by secessionist extremists but as an unbalanced, monomaniacal Unionist zealot who purposely--and perhaps unnecessarily--brought war to a fragile state whose populace had voted overwhelmingly to stay out of the conflict.

Phillips meticulously examines Lyon's role in the Camp Jackson affair, his quest to oust the pro-southern governor of Missouri, and his campaign to eliminate the secessionist element in the state. He contends that Lyon's actions in Missouri in 1861 were congruent with his dogmatic personality and troubled past. Damned Yankee is a complex, often shocking, portrait of one of the most controversial figures of the Civil War and a sobering study of how the faults of men may greatly affect history.