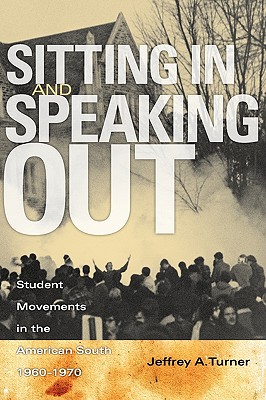 Sitting In and Speaking Out: Student Movements in the American South, 1960-1970

By: Turner, Jeffrey A.

In Sitting In and Speaking Out, Jeffrey A. Turner examines student movements in the South to grasp the nature of activism in the region during the turbulent 1960s.

Turner argues that the story of student activism is too often focused on national groups like Students for a Democratic Society and events at schools like Columbia University and the University of California at Berkeley. Examining the activism of black and white students, he shows that the South responded to national developments but that the response had its own trajectory--one that was rooted in race. Turner looks at such events as the initial desegregation of campuses; integration's long aftermath, as students learned to share institutions; the Black Power movement; and the antiwar movement.

Escalating protest against the Vietnam War tested southern distinctiveness, says Turner. The South's tendency toward hawkishness impeded antiwar activism, but once that activism arrived, it was--as in other parts of the country--oriented toward events at national and global scales. Nevertheless, southern student activism retained some of its core characteristics. Even in the late 1960s, southern protesters' demands tended toward reform, often eschewing calls to revolution increasingly heard elsewhere. Based on primary research at more than twenty public and private institutions in the deep and upper South, including historically black schools, Sitting In and Speaking Out is a wide-ranging and sensitive portrait of southern students navigating a remarkably dynamic era.

Title: Sitting In and Speaking Out: Student Movements in the American South, 1960-1970

Sitting In and Speaking Out: Student Movements in the American South, 1960-1970