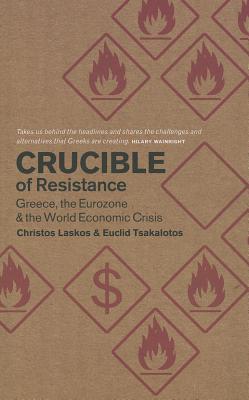 Crucible of Resistance: Greece, the Eurozone and the World Economic Crisis

Syriza's victory in the 2015 Greek general election has shaken the foundations of the Western political establishment and has given new hope to the millions suffering the austerity measures imposed by the European Troika. Many people are discussing how this has happened and what it is about Greece that has created such a centre of radicalism?

Written by Deputy Finance Minister and chief economics spokesman for Syriza Euclid Tsakalotos and economist Christos Laskos, Crucible of Resistance argues that Greece's exceptionalism is largely a myth. The blame game that has been played by the EU powers is an ideological tool used to shift attention from the realities of both European and global capitalist economic order.

By alienating an entire nation of people, the Troika has revealed the internal contradictions of the modern neoliberal establishment, as well as the inadequacies of the earlier social-democratic Keynesian regime. Tsakalotos and Laskos suggest that there is very little that differentiates Greece from other countries struggling under austerity, and that parties such as Syriza could usher in a new, democratic and socialist era across the continent.

Title: Crucible of Resistance: Greece, the Eurozone and the World Economic Crisis

Crucible of Resistance: Greece, the Eurozone and the World Economic Crisis