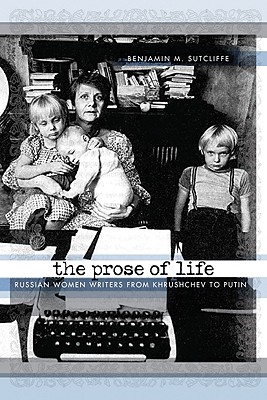 The Prose of Life: Russian Women Writers from Khrushchev to Putin

Both before and after the collapse of the Soviet Union, everyday life and the domestic sphere served as an ideological battleground, simultaneously threatening Stalinist control and challenging traditional Russian gender norms that had been shaken by the Second World War. The Prose of Life examines how six female authors employed images of daily life to depict women's experience in Russian culture from the 1960s to the present. Byt, a term connoting both the everyday and its many petty problems, is an enduring yet neglected theme in Russian literature: its very ordinariness causes many critics to ignore it. Benjamin Sutcliffe's study is the first sustained examination of how and why everyday life as a literary and philosophical category catalyzed the development of post-Stalinist Russian women's prose, particularly since the collapse of the Soviet Union.
A focus on the representation of everyday life in women's prose reveals that a first generation of female writers (Natal'ia Baranskaia, Irina Grekova) both legitimated and limited their successors (Liudmila Petrushevskaia, Tat'iana Tolstaia, Liudmila Ulitskaia, and Svetlana Vasilenko) in their choice of literary topics. The Prose of Life traces the development, and intriguing ruptures, of recent Russian women's prose, becoming a must-read for readers interested in Russian literature and gender studies.

Title: The Prose of Life: Russian Women Writers from Khrushchev to Putin

The Prose of Life: Russian Women Writers from Khrushchev to Putin