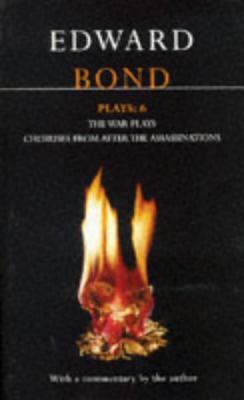 Bond Plays: 6: The War Plays; Choruses from After the Assassinations (Contemporary Dramatists) (Vol 6)

Plays Six includes some of the most acclaimed work of Edward Bond, one of Britain's greatest living contemporary dramatists, who is widely studied by schools and colleges. The collection includes a commentary by the author.

The collection includes The War Plays and Choruses from After the Assasinations. In The War Plays (Red Black and Ignorant, The Tin Can People, Great Peace): "Bond particularises daunting themes and subjects, but examines them within the context of every day life. His platform is a trilogy of plays that deal with the aftermath of a nuclear holocaust. The first, - a quick, telling chronicle of a life destroyed before it ever got lived - puts forth Bond's notions of contemporary cultural corruption and conditioning. In play two the demoralised inheritors of a ravaged earth try to rationalise an existence predicated on death. The third play enlarges the issues by focussing on a post-apocalyptic Mother Courage for whom schizoid suffering becomes a survival technique." (Time Out). In Choruses From After The Assassinations, Bond forecasts questions fifty years into the future, in an age of escalating militarism.Edward Bond is "a great playwright - many, particularly in continental Europe, would say the greatest living English playwright" (Independent)

Bond Plays: 6: The War Plays; Choruses from After the Assassinations (Contemporary Dramatists) (Vol 6)