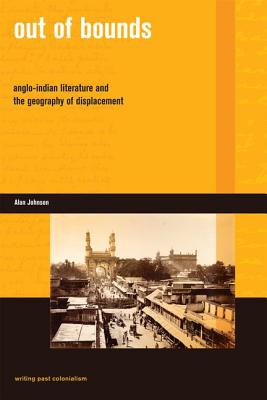 Out of Bounds: Anglo-Indian Literature and the Geography of Displacement (Writing Past Colonialism)

Out of Bounds focuses on the crucial role that conceptions of iconic colonial Indian spaces--jungles, cantonments, cities, hill stations, bazaars, clubs--played in the literary and social production of British India. Author Alan Johnson illuminates the geographical, rhetorical, and ideological underpinnings of such depictions and, from this, argues that these spaces operated as powerful motifs in the acculturation of Anglo-India. He shows that the bicultural, intrinsically ambivalent outlook of Anglo-Indian writers is acutely sensitive to spatial motifs that, insofar as these condition the idea of home and homelessness, alternately support and subvert conventional colonial perspectives.

Colonial spatial motifs not only informed European representations of India, but also shaped important aesthetic notions of the period, such as the sublime. This book also explains how and why Europeans' rhetorical and visual depictions of the Indian subcontinent, whether ostensibly administrative, scientific, or aesthetic, constituted a primary means of memorializing Empire, creating an idiom that postcolonial India continues to use in certain ways. Consequently, Johnson examines specific motifs of Anglo-Indian cultural remembrance, such as the hunting memoir, hill station life, and the Mutiny, all of which facilitated the mythic iconography of the Raj. He bases his work on the premise that spatiality (the physical as well as social conceptualization of space) is a vital component of the mythos of colonial life and that the study of spatiality is too often a subset of a focus on temporality.

Johnson reads canonical and lesser-known fiction, memoirs, and travelogues alongside colonial archival documents to identify shared spatial motifs and idioms that were common to the period. Although he discusses colonial works, he focuses primarily on the writings of Anglo-Indians such as Rudyard Kipling, John Masters, Jim Corbett, and Flora Annie Steel to demonstrate how conventions of spatial identity were rhetorically maintained--and continually compromised. All of these considerations amplify this book's focus on the porosity of boundaries in literatures of the colony and of the nation.Out of Bounds will be of interest to not only postcolonial literary scholars, but also scholars and students in interdisciplinary nineteenth-century studies, South Asian cultural history, cultural anthropology, women's studies, and sociology.

Title: Out of Bounds: Anglo-Indian Literature and the Geography of Displacement (Writing Past Colonialism)

Out of Bounds: Anglo-Indian Literature and the Geography of Displacement (Writing Past Colonialism)