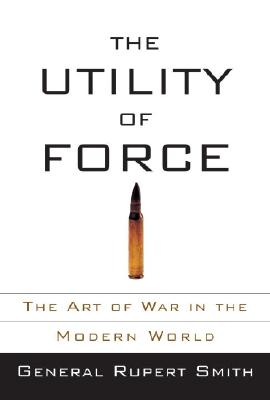 The Utility of Force: The Art of War in the Modern World

"War no longer exists," writes General Sir Rupert Smith, powerfully reminding us that the clash of mass national armies--the system of war since Napoleon--will never occur again. Instead, he argues in this timely book, we must be prepared to adapt tactics to each conflict, or lose the ability to protect ourselves and our way of life.
General Smith draws on his vast experience as a commander in the 1991 Gulf War, in Bosnia, Kosovo and Northern Ireland, to give us a probing analysis of modern war and to call for radically new military thinking. Why, he asks, do we use armed force to solve our political problems? And how is it that our armies can win battles but fail to solve the problems?
From Iraq to the Balkans, and from Afghanistan to Chechnya, Smith charts a stream of armed interventions that have failed to deliver on promises of resolution. He demonstrates why today's conflicts must be understood as intertwined political and military events. He makes clear why the current one-size-fits-all model of total war, fought out on battlefields, that politicians still cling to must be abandoned in favor of new strategies that take into account the fact that wars are now fought among civilian populations. And he offers a compelling new model for how to fight these battles--and secure our world.
Clear, incisive and provocative, "The Utility of Force" will fundamentally change the way we understand war.

Title: The Utility of Force: The Art of War in the Modern World

The Utility of Force: The Art of War in the Modern World