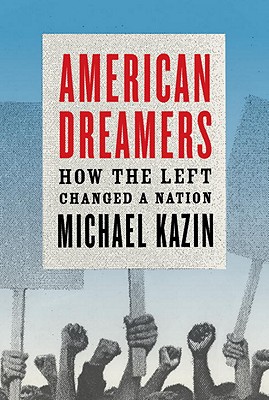 American Dreamers: How the Left Changed a Nation

A panoramic yet intimate history of the American left--of the reformers, radicals, and idealists who have fought for a more just and humane society, from the abolitionists to Michael Moore and Noam Chomsky--that gives us a revelatory new way of looking at two centuries of American politics and culture.
Michael Kazin--one of the most respected historians of the American left working today--takes us from abolitionism and early feminism to the labor struggles of the industrial age, through the emergence of anarchists, socialists, and communists, right up to the New Left in the 1960s and '70s. While the history of the left is a long story of idealism and determination, it has also been, in the traditional view, a story of movements that failed to gain support from mainstream America. In "American Dreamers," Kazin tells a new history: one in which many of these movements, although they did not fully succeed on their own terms, nonetheless made lasting contributions to American society that led to equal opportunity for women, racial minorities, and homosexuals; the celebration of sexual pleasure; multiculturalism in the media and the schools; and the popularity of books and films with altruistic and antiauthoritarian messages.
Deeply informed, at once judicious and impassioned, and superbly written, "American Dreamers" is an essential book for our times and for anyone seeking to understand our political history and the people who made it.

Title: American Dreamers: How the Left Changed a Nation

American Dreamers: How the Left Changed a Nation