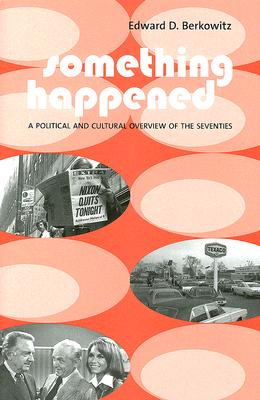 Something Happened: A Political and Cultural Overview of the Seventies

In both the literal and metaphorical senses, it seemed as if 1970s America was running out of gas. The decade not only witnessed long lines at gas stations but a citizenry that had grown weary and disillusioned. High unemployment, runaway inflation, and the energy crisis, caused in part by U.S. dependence on Arab oil, characterized an increasingly bleak economic situation.

As Edward D. Berkowitz demonstrates, the end of the postwar economic boom, Watergate, and defeat in Vietnam led to an unraveling of the national consensus. During the decade, ideas about the United States, how it should be governed, and how its economy should be managed changed dramatically. Berkowitz argues that the postwar faith in sweeping social programs and a global U.S. mission was replaced by a more skeptical attitude about government's ability to positively affect society. From Woody Allen to Watergate, from the decline of the steel industry to the rise of Bill Gates, and from Saturday Night Fever to the Sunday morning fervor of evangelical preachers, Berkowitz captures the history, tone, and spirit of the seventies. He explores the decade's major political events and movements, including the rise and fall of d tente, congressional reform, changes in healthcare policies, and the hostage crisis in Iran. The seventies also gave birth to several social movements and the "rights revolution," in which women, gays and lesbians, and people with disabilities all successfully fought for greater legal and social recognition. At the same time, reaction to these social movements as well as the issue of abortion introduced a new facet into American political life-the rise of powerful, politically conservative religious organizations and activists. Berkowitz also considers important shifts in American popular culture, recounting the creative renaissance in American film as well as the birth of the Hollywood blockbuster. He discusses how television programs such as All in the Family and Charlie's Angels offered Americans both a reflection of and an escape from the problems gripping the country.

Title: Something Happened: A Political and Cultural Overview of the Seventies

Something Happened: A Political and Cultural Overview of the Seventies