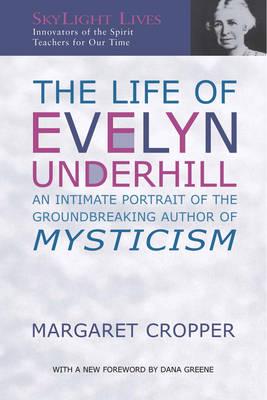 The Life of Evelyn Underhill: An Intimate Portrait of the Groundbreaking Author of Mysticism (Skylight Lives)

"Margaret Cropper was the first to capture Evelyn Underhill's] life, which now in this new century can continue to inspire, challenge and point the way for those on the ancient quest for the holy."
--from the Foreword by Dana Greene, dean of Oxford College of Emory University

SkyLight Lives reintroduces the lives and works of key spiritual figures of our time--people who by their teaching or example have challenged our assumptions about spirituality and have caused us to look at it in new ways.

Evelyn Underhill (1875-1941) was one of the most highly acclaimed spiritual thinkers of her day. Her fresh approach to mysticism provided one of the first invitations to modern seekers to realize that not only saints or great holy men could experience the love of God--but that all people contain within them a capacity for the Divine.

This intimate biography, written by one of Underhill's closest friends, allows us to appreciate this revolutionary woman as both a charming, down-to-earth friend and a groundbreaking spiritual seeker and guide.

Through letters, personal reminiscences, and excerpts from Underhill's much-loved published writings--including her definitive Mysticism, published in 1911 and continuously in print since then--Margaret Cropper captures the spirit, journey and wisdom of one of the most influential women of the early twentieth century.

Updated with a new foreword by Dana Greene, dean of Oxford College of Emory University, this intriguing spiritual portrait includes a brief memoir of Lucy Menzies, one of Underhill's closest confidants, highlighting their remarkable relationship.

This biography of Evelyn Underhill, one of the greatest spiritual thinkers of the early twentieth century, guides readers on a voyage through her life and a survey of her spiritual classics that would forever bring the Divine into the everyday for countless people.

A passionate writer and teacher who wrote elegantly on mysticism, worship and devotional life, Evelyn Underhill urged the integration of personal spirituality and worldly action. This is the moving story of how she made her way toward spiritual maturity, from her early days of agnosticism to the years when her influence was felt throughout the world.

An early believer that contemplative prayer is not just for monks and nuns but for anyone willing to undertake it, Underhill considered the study of modern science not as a threat to contemplation but rather an enhancement of it. Her many lectures and writings on mysticism and spirituality, including her classic Mysticism: A Study in the Nature and Development of Man's Spiritual Consciousness, inspired the many people touched by her unique passion to take on a spiritual life.

Title: The Life of Evelyn Underhill: An Intimate Portrait of the Groundbreaking Author of Mysticism (Skylight Lives)

The Life of Evelyn Underhill: An Intimate Portrait of the Groundbreaking Author of Mysticism (Skylight Lives)