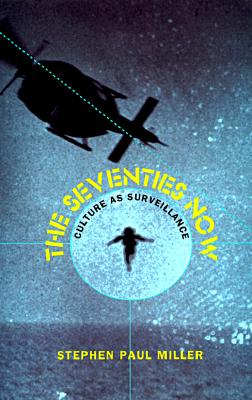 Most would agree that American culture changed dramatically from the 1960s to the 1980s. Yet the 1970s, the decade "in between," is still somehow thought of as a cultural wasteland. In The Seventies Now Stephen Paul Miller debunks this notion by examining a wide range of political and cultural phenomena--from the long shadow cast by Richard Nixon and the Watergate scandal to Andy Warhol and the disco scene--identifying in these phenomena a pivotal yet previously unidentified social trend, the movement from institutionalized external surveillance to the widespread internalization of such practices.
The concept of surveillance and its attendant social ramifications have been powerful agents in U.S. culture for many decades, but in describing how during the 1970s Americans learned to "survey" themselves, Miller shines surprising new light on such subjects as the women's movement, voting rights enforcement, the Ford presidency, and environmental legislation. He illuminates the significance of what he terms "microperiods" and analyzes relevant themes in many of the decade's major films--such as The Deer Hunter, Network, Jaws, Star Wars, and Apocalypse Now--and in the literature of writers including John Ashbery, Toni Morrison, Adrienne Rich, and Sam Shepard. In discussing the reverberations of the 1969 Stonewall riots, technological innovations, the philosophy of Michel Foucault, and a host of documents and incidents, Miller shows how the 1970s marked an important period of transition, indeed a time of many transitions, to the world we confront at the end of the millennium.
The Seventies Now will interest students and scholars of cultural studies, American history, theories of technology, film and literature, visual arts, and gay and lesbian studies.