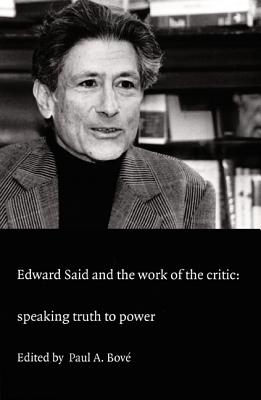 Edward Said and the Work of the Critic: Speaking Truth to Power (a boundary 2 book)

For at least two decades the career of Edward Said has defined what it means to be a public intellectual today. Although attacked as a terrorist and derided as a fraud for his work on behalf of his fellow Palestinians, Said's importance extends far beyond his political activism. In this volume a distinguished group of scholars assesses nearly every aspect of Said's work--his contributions to postcolonial theory, his work on racism and ethnicity, his aesthetics and his resistance to the aestheticization of politics, his concepts of figuration, his assessment of the role of the exile in a metropolitan culture, and his work on music and the visual arts.
In two separate interviews, Said himself comments on a variety of topics, among them the response of the American Jewish community to his political efforts in the Middle East. Yet even as the Palestinian struggle finds a central place in his work, it is essential--as the contributors demonstrate--to see that this struggle rests on and gives power to his general "critique of colonizers" and is not simply the outgrowth of a local nationalism. Perhaps more than any other person in the United States, Said has changed how the U.S. media and American intellectuals must think about and represent Palestinians, Islam, and the Middle East. Most importantly, this change arises not as a result of political action but out of a potent humanism--a breadth of knowledge and insight that has nourished many fields of inquiry. Originally a special issue of boundary 2, the book includes new articles on minority culture and on orientalism in music, as well as an interview with Said by Jacqueline Rose.
Supporting the claim that the last third of the twentieth century can be called the "Age of Said," this collection will enlighten and engage students in virtually any field of humanistic study.

Title: Edward Said and the Work of the Critic: Speaking Truth to Power (a boundary 2 book)

Edward Said and the Work of the Critic: Speaking Truth to Power (a boundary 2 book)