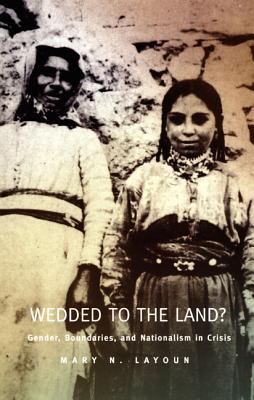 Wedded to the Land? Gender, Boundaries, & Nationalism in Crisis

In Wedded to the Land? Mary N. Layoun offers a critical commentary on the idea of nationalism in general and on specific attempts to formulate alternatives to the concept in particular. Narratives surrounding three geographically and temporally different national crises form the center of her study: Greek refugees' displacement from Asia Minor into Greece in 1922, the 1974 right-wing Cypriot coup and subsequent Turkish invasion of Cyprus, and the Palestinian and PLO expulsion from Beirut following the Israeli invasion in 1982.
Drawing on readings of literature and of official documents and decrees, songs, poetry, cinema, public monuments, journalism, and conversations with exiles, refugees, and public officials, Layoun uses each historical incident as a means of highlighting a recurring trope within constructs of nationalism. The displacement of the Greek refugees in the 1920s calls into question the very idea of home, as well as the desire for ethnic homogeneity within nations. She reads the Cypriot coup and invasion as an illustration of the gendering of nation and how the notion of the inviolable woman came to represent sovereignity. In her third example she shows how the Palestinian and PLO expulsion from Beirut highlights the ambiguity of the borders upon which many manifestations of nationalism putatively depend. These chapters are preceded and introduced by a discussion of "culturing the nation" and closed by a consideration of citizenship and silence in which Layoun discusses rights ostensibly possessed by all members of a political community.
This book will be of interest to scholars engaged in cultural and critical theory, Middle Eastern and Mediterranean history, literary studies, political science, postcolonial studies, and gender studies.

Title: Wedded to the Land? Gender, Boundaries, & Nationalism in Crisis

Wedded to the Land? Gender, Boundaries, & Nationalism in Crisis