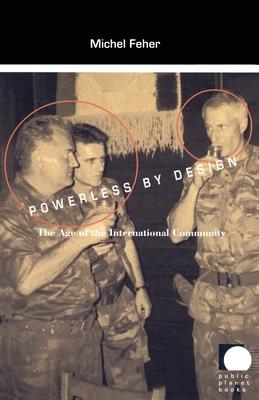 Powerless by Design: The Age of the International Community (Public Planet Books)

In Powerless by Design Michel Feher addresses Western officials' responses to post-Cold War conflicts and analyzes the reactions of the Left to their governments' positions. Sometime in the early 1990s, Feher argues, U.S. and European leaders began portraying themselves as the representatives of a new international community. In that capacity, they developed a doctrine that was not only at odds with the rhetoric of the Cold War but also a far cry from the "new world order" announced at the outset of the decade. Whereas their predecessors had invested every regional conflict with an ideological stake, explains Feher, the representatives of this international community claimed that the crises they confronted did not call for partisan involvement.
Exemplary of this new approach were Western responses to ethnic cleansing in the former Yugoslavia and genocide in Rwanda. In order to avoid costly interventions, U.S. and European leaders traced these crimes to ancient tribal enmities and professed that the role of the international community should be limited to a humanitarian, impartial, and conciliatory engagement with all the warring parties. They thus managed to appear righteous but powerless, at least until NATO's intervention in Kosovo. Faced with this doctrine, both the liberal and radical wings of the Western Left found themselves in an uneasy position. Liberals, while lured by their leaders' humanitarianism were nonetheless disturbed by the dismal results of the policies carried out in the name of the international community. Conversely, anti-imperialist militants were quick to mock the hypocrisy of their governments' helpless indignation, yet certainly not prepared to demand that Western powers resort to force.
Are we still in this "age of the international community"? Feher shows that with NATO's intervention in Kosovo, both liberal and radical activists suddenly found their mark: the former welcomed the newfound resolve of their governments, while the latter condemned it as the return of the imperialist "new world order." For Western leaders, however, the war against Serbia proved an accident rather than a turning point. Indeed, less than a year later, their indifference to the destruction of Chechnya by Russian troops suggested that the discursive strategy exposed in Powerless by Design might remain with us for quite some time.

Title: Powerless by Design: The Age of the International Community (Public Planet Books)

Powerless by Design: The Age of the International Community (Public Planet Books)