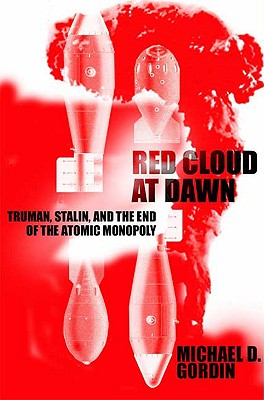 Red Cloud at Dawn: Truman, Stalin, and the End of the Atomic Monopoly

On August 29, 1949, the first Soviet test bomb, dubbed First Lightning, exploded in the deserts of Kazakhstan. The startling event was not simply a technical experiment that confirmed the ability of the Soviet Union to build nuclear bombs during a period when the United States held a steadfast monopoly; it was also an international event that marked the beginning of an arms race that would ultimately lead to nuclear proliferation beyond the two superpowers.

Following a trail of espionage, secrecy, deception, political brinksmanship, and technical innovation, Michael D. Gordin challenges conventional technology-centered nuclear histories by looking at the prominent roles that atomic intelligence and other forms of information play in the uncertainties of nuclear arms development and political decision-making. With the use of newly opened archives, "Red Cloud at Dawn "focuses on the extraordinary story of First Lightning to provide a fresh understanding of the origins of the nuclear arms race, as well as the all-too-urgent problem of proliferation.

Title: Red Cloud at Dawn: Truman, Stalin, and the End of the Atomic Monopoly

Red Cloud at Dawn: Truman, Stalin, and the End of the Atomic Monopoly