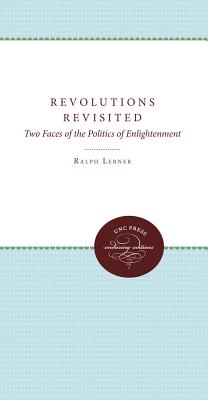 Revolutions Revisited: Two Faces of the Politics of Enlightenment

In this elegant extended essay, Ralph Lerner concentrates on the politics of enlightenment--the process by which those who sought to set minds free went about their work. Eighteenth-century revolutionaries in America and Europe, Lerner argues, found that a revolution aimed at liberating bodies and minds had somehow to be explained and defended. Lerner first investigates how the makers of revolution sought to improve their public's aspirations and chances. He pays particular attention to Benjamin Franklin, to the tone and substance of revolutionaries' appeals on both sides of the Atlantic, and to the preoccupations of first- and second-generation enlighteners among the Americans. He then unfolds the art by which later political actors, confronting the profound political, constitutional, and social divisions of their own day, drew upon and reworked their national revolutionary heritage. Lerner's examination of the speeches and writings of Edmund Burke, Abraham Lincoln, and Alexis de Tocqueville shows them to be masters of a political rhetoric once closely analyzed by Plato and his medieval student al-Farabi but now nearly forgotten.

Title: Revolutions Revisited: Two Faces of the Politics of Enlightenment

Revolutions Revisited: Two Faces of the Politics of Enlightenment