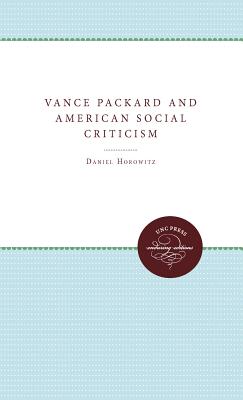 Vance Packard's bestselling books--Hidden Persuaders (1957), Status Seekers (1959), and Waste Makers (1960)--taught the generation that came of age in the late 1950s and early 1960s about the dangers posed by advertising, social climbing, and planned obsolescence. Like Betty Friedan and William H. Whyte, Jr., Packard (1914- ) was a journalist who played an important role in the nation's transition from the largely complacent 1950s to the tumultuous 1960s. He was also one of the first social critics to benefit from and foster the newly energized social and political consciousness of this period. Based in part on interviews with Packard, Daniel Horowitz's intellectual biography focuses on the period during which Packard left magazine writing to author his most famous works of social criticism. Horowitz traces the influence of Packard's education and early years in rural Pennsylvania, providing a deeper understanding of his thought and his later books. Packard's life, Horowitz contends, illuminates the dilemmas of a freelance social critic without inherited wealth or academic affiliation. His career also expands our understanding of how one era shaped the next, underscoring how the adversarial 1960s drew on the mass culture of the previous decade.