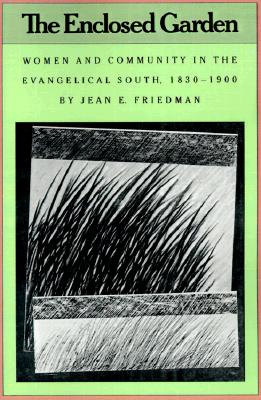 The southern women's reform movement emerged late in the nineteenth century, several decades behind the formation of the northern feminist movement. The Enclosed Garden explains this delay by examining the subtle and complex roots of women's identity to disclose the structures that defined -- and limited -- female autonomy in the South.

Jean Friedman demonstrates how the evangelical communities, a church-directed, kin-dominated society, linked plantation, farm, and town in the predominantly rural South. Family networks and the rural church were the princple influences on social relationships defining sexual, domestic, marital, and work roles. Friedman argues that the church and family, more than the institution of slavery, inhibited the formation of an antebellum feminist movement. The Civil War had little effect on the role of southern women because the family system regrouped and returned to the traditional social structure. Only with the onset of modernization in the late nineteenth century did conditions allow for the beginnings of feminist reform, and it began as an urban movement that did not challenge the family system.

Friedman arrives at a new understanding of the evolution of Victorian southern women's identity by comparing the experiences of black women and white women as revealed in church records, personal letters, and slave narratives. Through a unique use of dream analysis, Friedman also shows that the dreams women described in their diaries reveal their struggle to resolve internal conflicts about their families and the church community. This original study provides a new perspective on nineteenth-century southern social structure, its consequences for women's identity and role, and the ways in which the rural evangelical kinship system resisted change.