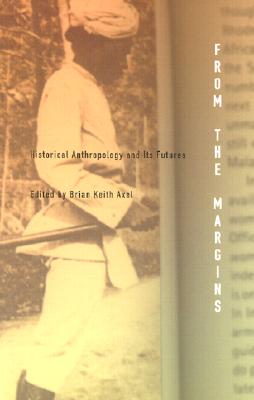 From the Margins: Historical Anthropology and Its Futures

Historical anthropology: critical exchange between two decidedly distinct disciplines or innovative mode of knowledge production? As this volume's title suggests, the essays Brian Keith Axel has gathered in From the Margins seek to challenge the limits of discrete disciplinary epistemologies and conventions, gesturing instead toward a transdisciplinary understanding of the emerging relations between archive and field.
In original articles encompassing a wide range of geographic and temporal locations, eminent scholars contest some of the primary preconceptions of their fields. The contributors tackle such topics as the paradoxical nature of American Civil War monuments, the figure of the "New Christian" in early seventeenth-century Peru, the implications of statistics for ethnography, and contemporary South Africa's "occult economies." That anthropology and history have their provenance in--and have been complicit with--colonial formations is perhaps commonplace knowledge. But what is rarely examined is the specific manner in which colonial processes imbue and threaten the celebratory ideals of postcolonial reason or the enlightenment of today's liberal practices in the social sciences and humanities.
By elaborating this critique, From the Margins offers diverse and powerful models that explore the intersections of historically specific local practices with processes of a world historical order. As such, the collection will not only prove valuable reading for anthropologists and historians, but also for scholars in colonial, postcolonial, and globalization studies.

Title: From the Margins: Historical Anthropology and Its Futures

From the Margins: Historical Anthropology and Its Futures