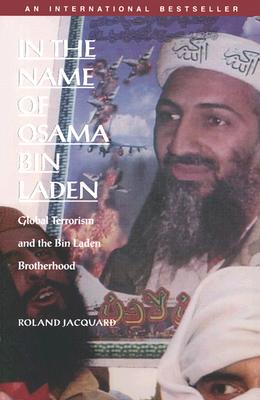 In the Name of Osama Bin Laden: Global Terrorism and the Bin Laden Brotherhood

"A must read for all who continue to grapple with the twin legacy of hatred and hope from September 11. . . "*

International terrorism expert Roland Jacquard's In the Name of Osama bin Laden presents a dramatic portrait of the world's most wanted terrorist and his extensive brotherhood--the network of people who operate "in his name." Published originally in France the very week of September 11, as events in the United States shook the world, the book has become an international bestseller.
Jacquard details how bin Laden became an international emblem of fundamentalist, pan-Islamic, anti-U.S. fervor and the leader of a brotherhood so passionate that devotees who have never met him will act autonomously in his name. The author explains the global character of bin Laden's organization, elaborating the extent of his sphere of influence in Europe and Asia. Jacquard reveals the construction of bin Laden's networks--including a profile of his inner circle--and their collaboration with overlapping webs of banking, drug trafficking, religious, and terrorist organizations. He considers the brotherhood's access to biological, chemical, and nuclear weapons and warns that, with or without bin Laden, this global terrorist force will remain a threat.
Now in English, this edition has been substantially updated in light of recent world events and expanded to include previously unpublished materials, featuring a new introduction and afterword. New documents include an April 2001 interview by the author with bin Laden; a September 24 proclamation by bin Laden to Muslims in Pakistan; and a key page from Dr. Ayman al-Zawahiri's book justifying eternal jihad, which was smuggled out of Afghanistan in October 2001.

Title: In the Name of Osama Bin Laden: Global Terrorism and the Bin Laden Brotherhood

In the Name of Osama Bin Laden: Global Terrorism and the Bin Laden Brotherhood