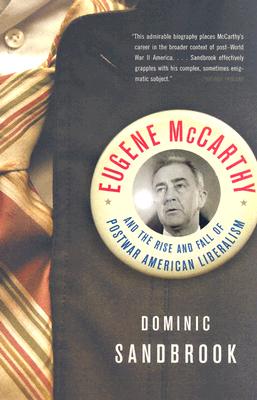 Eugene McCarthy: The Rise and Fall of Postwar American Liberalism

Originally a New Deal liberal and aggressive anticommunist, Senator Eugene McCarthy famously lost faith with the Democratic party over Vietnam. His stunning challenge to Lyndon Johnson in the 1968 New Hampshire primary inspired young liberals and was one of the greatest electoral upsets in American history. But the 1968 election ultimately brought Richard Nixon and the Republican Party to power, irrevocably shifting the country's political landscape to the right for decades to come.

Dominic Sandbrook traces one of the most remarkable and significant lives in postwar politics, a career marked by both courage and arrogance. Sandbrook draws on extensive new research - including interviews with McCarthy himself - to show convincingly how Eugene McCarthy's political experience embodies the larger decline of American liberalism after World War II. These were tumultuous times in American politics, and Sandbrook vividly captures the drama and historical significance through his intimate portrait of a singularly interesting man at the heart of it all.

Eugene McCarthy: The Rise and Fall of Postwar American Liberalism