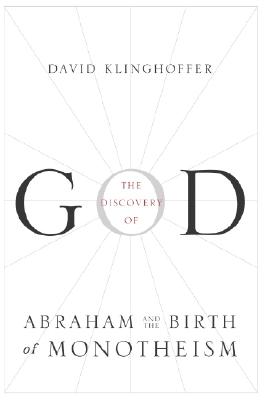 The Discovery of God: Abraham and the Birth of Monotheism

Fifty-three percent of the world's population practices Judaism, Christianity, and Islam, religions that all trace their lineage to the towering, quasi-mythological figure of Abraham. In this reverent biography of the man who invented-or discovered-God, David Klinghoffer disentangles history from myth and uncovers the profound impact of Abraham's message on his time and on the development of the modern world.
"The Discovery of God" chronicles Abraham's life from his birth in Mesopotamia through his travels as preacher and missionary throughout the Middle East. Many of the primary sites of Abraham's life and career still exist, and Klinghoffer describes what they were like in ancient times and how they appear today. The tangible details of the polytheistic culture are re-created, showing how Abraham challenged the most basic beliefs of his contemporaries. He did not set out to establish the Jewish religion, but rather to spread the message of ethical monotheism as it was revealed to him-a powerful message that deepened over time, as did his faith and relationship with God.
In contrast to many scholars who, troubled by its contradictions and apparent errors, see the Bible as the work of a series of scribes and editors, Klinghoffer argues that the Bible should be viewed as an esoteric text that an only be comprehended in light of the oral tradition from which it emanated. Combining rigorous scholarship and interpretive ingenuity, he draws on biblical commentary and the Jewish oral tradition as preserved by sages from the Talmudic scholars to Maimonidies to explore and explain the miraculous origins of monotheism.
At a time when the world seems to moving toward a renewedconfrontation between the three great Abrahamic faiths, "The Discovery of God" is a potent reminder of the history and beliefs that unite them.

Title: The Discovery of God: Abraham and the Birth of Monotheism

The Discovery of God: Abraham and the Birth of Monotheism