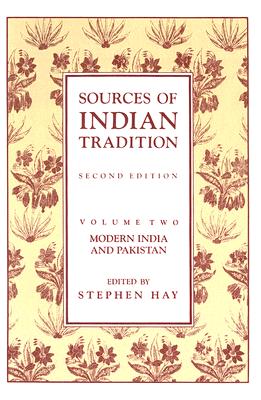 Volume 2 - some shelfwear but still NICE! - may have remainder mark or previous owner's name

Since 1958 one of the most important and widely used texts on civilization in South Asia (now the nation-states of India, Pakstan, Bangladesh, Sri Lanka and Nepal), this classic is now extensively revised, with much new material added. Introductory essays explain the particular settings in which leading Indian thinkers have expressed their ideas about religious, social, political, and economic questions. Brief summaries precede each passage from their writings or sayings.

Chapters address the opening of India to the West; Hindu and Muslim social and religious reform movements; the emergence of both moderate and extremist nationalisms; the thought of Mahatma Gandhi; public policies for independent India; Pakistan's formation as an Islamic state, and other topics.