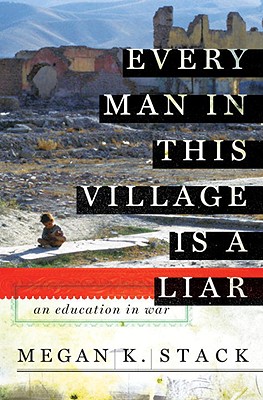 Every Man in This Village is a Liar: An Education in War

A shattering account of war and disillusionment from a young woman reporter on the front lines of the war on terror.
A few weeks after the planes crashed into the World Trade Center on 9/11, journalist Megan K. Stack, a twenty-five-year-old national correspondent for the "Los Angeles Times," was thrust into Afghanistan and Pakistan, dodging gunmen and prodding warlords for information. From there, she traveled to war-ravaged Iraq and Lebanon and other countries scarred by violence, including Israel, Egypt, Libya, and Yemen, witnessing the changes that swept the Muslim world and laboring to tell its stories.
"Every Man in This Village Is a Liar" is Megan K. Stack's riveting account of what she saw in the combat zones and beyond. She relates her initial wild excitement and her slow disillusionment as the cost of violence outweighs the elusive promise of freedom and democracy. She reports from under bombardment in Lebanon; records the raw pain of suicide bombings in Israel and Iraq; and, one by one, marks the deaths and disappearances of those she interviews.
Beautiful, savage, and unsettling, "Every Man in This Village Is a Liar" is a memoir about the wars of the twenty-first century that readers will long remember.

Title: Every Man in This Village is a Liar: An Education in War

Every Man in This Village is a Liar: An Education in War