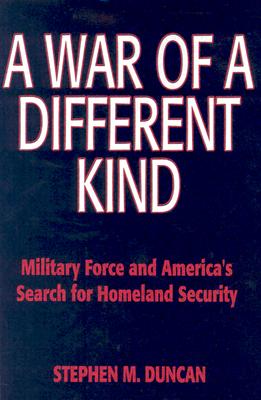 A War of a Different Kind: Military Force and America's Search for Homeland Security

The radically new homeland security, military, and legal strategies developed by the United States in the months following the terrorists attacks on the World Trade Center and Pentagon are given comprehensive treatment in this book by a former senior Pentagon official, combat veteran, and criminal prosecutor. Stephen M. Duncan draws on a lifetime of military and legal experience to examine the many questions relating to the role of the armed forces in homeland security, including elements of constitutional and criminal law, foreign policy, tradition and custom, federal-state and inter-agency relations, and politics, as well as military strategy and operations.

Among the diverse subjects the author discusses are military tribunals and the International Criminal Court, the statute governing the use of military personnel in law enforcement, defense transformation, the constitutional power of the president, and the reorganization of the government to meet the terrorist threat. Duncan also discusses the strategy and tactics used in Afghanistan and Iraq and critically evaluates the nation's political leadership before and after the 9/11 attacks. His book gives readers access to a wealth of information essential to an understanding of the full picture and at the same time puts them in the midst of policy debates to grasp the immediacy of the situation. This important and absorbing historical narrative will attract general readers as well as those with experience in national security issues, politics, and the law.

Title: A War of a Different Kind: Military Force and America's Search for Homeland Security

A War of a Different Kind: Military Force and America's Search for Homeland Security