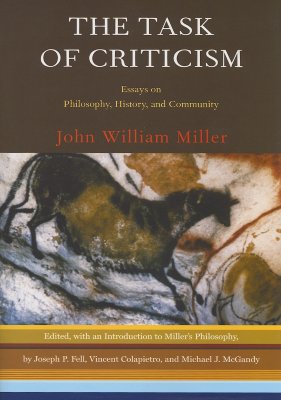 The Task of Criticism: Essays on Philosophy, History, and Community

Erudite and eloquent, John William Miller's writing engages readers with his "earthy" treatment of basic philosophical questions. Designed as an introduction to a compelling historicist philosophy, this volume presents Miller's best and most representative essays in a single, authoritative edition. Miller (1895-1978) taught at Williams College, and he is well known for his extraordinary teaching (described in Masters: Portraits of Great Teachers). He was also a philosopher of the first rank, who arrived at a strikingly original reinterpretation of the history of philosophy and the perennial philosophical problems, especially dualism. Challenging the dogmatism and nihilism that mark so much of recent philosophy, Miller advocated a thoughtful and engaged approach to life one that revitalizes philosophical activity, embraces history, and joins reflection with participation in a democratic community. The editors have selected twenty-nine essays and have composed succinct introductions to each. Joseph P. Fell has contributed a general introduction that places Miller's thought in context and exhibits the contemporary relevance of his philosophy."

Title: The Task of Criticism: Essays on Philosophy, History, and Community

The Task of Criticism: Essays on Philosophy, History, and Community