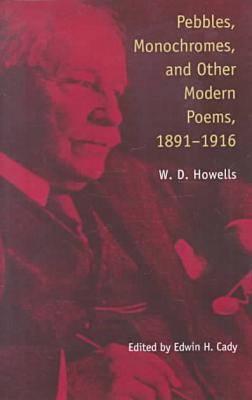 For William Dean Howells, the 1880s throbbed with literary warfare over theory and criticism (realism), and social justice. But the terrible climax was more personal and came in the death of his daughter in 1889. The blow altered him radically. Among other changes, a poetry new to him emerged, a poetry in the modern tradition. This new poetry is available now as never before in Pebbles, Monochromes, and Other Modern Poems, 1896-1916. It is metaphysical, agnostic, and ironic with a modernist voice. Praised at the century's start by figures as notable as Stephen Crane, Henry and William James, W. E. B. DuBois, and Hamlin Garland, Howells arises again at the end of the century, hailed by the likes of John Updike and Gore Vidal. This rich cache of modern poems by W. D. Howells, lost for so long, is now made accessible under the editorial eye of Edwin Cady. Its significance is central to the understanding of the literary history and culture that defined the modern era and to the progeny that grew from that fertile soil.