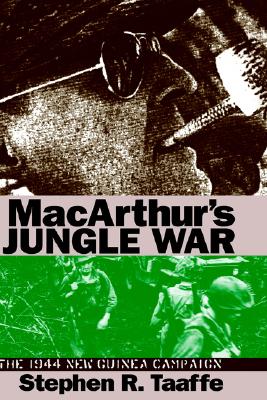 When General Douglas MacArthur led Allied troops into the jungles of New Guinea in World War II, he was already looking ahead. By successfully leapfrogging Japanese forces on that island, he placed his armies in a position to fulfill his personal promise to liberate the Philippines.

The New Guinea campaign has gone down in history as one of MacArthur's shining successes. Now Stephen Taaffe has written the definitive history of that assault, showing why it succeeded and what it contributed to the overall strategy against Japan. His book tells not only how victory was gained through a combination of technology, tactics, and Army-Navy cooperation, but also how the New Guinea campaign exemplified the strategic differences that plagued the Pacific War, since many high-ranking officers considered it a diversionary tactic rather than a key offensive. MacArthur's Jungle War examines the campaign's strategic background and individual operations, describing the enormous challenges posed by jungle and amphibious warfare. Perhaps more important, it offers a balanced assessment of MacArthur's leadership and limitations, revealing his reliance on familiar battle plans and showing the vital role that subordinates played in his victory. Taaffe tells how MacArthur played the difficulties of the New Guinea campaign by maintaining his undivided attention on reaching the Philippines. He also discloses how MacArthur frequently deceived both his superiors and the public in order to promote his own agenda, and examines errors the general would later repeat on a larger scale up through the Korean War. MacArthur's Jungle War offers historians a more analytical treatment of the New Guinea campaign than is found in previous works, and is written with a dramatic flair that will appeal to military buffs. By revealing the interaction among American military planning, interservice politics, MacArthur's generalship, and the American way of war, Taaffe's account provides a clearer understanding of America's Pacific war strategy and shows that the New Guinea offensive was not a mere backwater affair, but a critical part of the war against Japan.