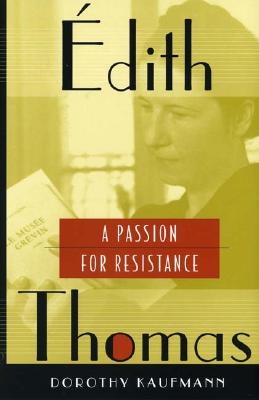 ï¿½dith Thomas: A Passion for Resistance

dith Thomas (1909-1970), a remarkable French woman of letters, was deeply involved in the traumatic upheavals of her time: most crucially the resistance to Nazi occupation and the collaborationist Vichy regime, but also the Spanish Civil War and the Algerian War. During the occupation, she played an essential role in the struggle to counteract Nazi and P tainist propaganda. She was the only woman in the Paris network of Resistance writers; they held their clandestine meetings in her left-bank apartment.Dorothy Kaufmann's powerful and moving book is based in large part on previously unavailable material that dith Thomas, a historian, novelist, and journalist, chose not to publish during her lifetime. A particularly fascinating chapter in Thomas's life was her intimate relationship with Dominique Aury, who wrote Story of O as "Pauline R age." The astonishing documents made available to Kaufmann by Aury include Thomas's eight notebooks of diaries, which she kept from 1931 to 1963; her fictional diary of a collaborator, written during the first year of the occupation; and her political memoir, to which she gave the disturbing title Le T moin compromis (The Compromised Witness). dith Thomas: A Passion for Resistance sheds light on the historical dimensions of Thomas's life and work and on the autobiographical complexity of her writing, which everywhere illustrates her personal courage. Kaufmann follows dith Thomas's itinerary as it intersects with that of well-known contemporaries--in particular Simone de Beauvoir, Jean-Paul Sartre, Albert Camus, Louis Aragon, Jean Paulhan, and, of course, Dominique Aury.

ï¿½dith Thomas: A Passion for Resistance