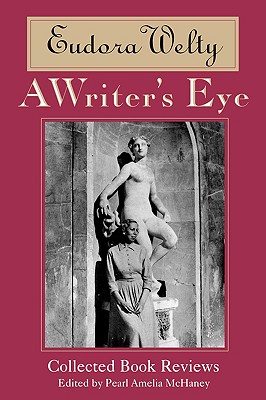 A Writer's Eye: Collected Book Reviews by Eudora Welty edited, with an introduction by Pearl Amelia McHaney Although she is eminent primarily as the prize-winning author of classic works of fiction, Eudora Welty is notable also as an astute literary critic. Her essays on the art of fiction and on the writers who enlarged the range of the short story and the novel are definitive pieces. Her distinguished book reviews, along with her critical essays, augment her reputation for being one of the most discerning author-critics in literary America. This collection of her book reviews manifests the connecting of her penetrating eye with her responsive intellect in forming sympathetic judgments of the books she reviewed. Between 1942 and 1984 Welty wrote sixty-seven reviews of seventy-four books. Fifty-eight of these appeared in the New York Times Book Review, and others in the Saturday Review of Literature, Tomorrow, the Hudson Review, the New York Post, and the Sewanee Review. The reviewed books include novels, short story collections, books of essays, biographies and memoirs, books of letters, children's books, books of ghost stories, photography books, books of literary criticism, and books of World War II art. Over nearly half a century she reviewed books by some of the foremost authors of her time: Virginia Woolf, William Faulkner, V. S. Pritchett, Colette, Isak Dinesen, E. B. White, E. M. Forster, J. D. Salinger, Ross Macdonald, Patrick White, S. J. Perelman, Annie Dillard, Elizabeth Bowen, and Katherine Anne Porter. A Writer's Eye includes all of Welty's book reviews, even one published in the New York Times Book Review under the pseudonym "Michael Ravenna." Sixteen of the reviews were collected previously in Welty's The Eye of the Story (1978). In this collection Pearl Amelia McHaney's introduction records the history of Welty's career in book reviewing and illuminates the honesty and compassion with which Welty wrote reviews. Welty's keen vision, her wit, and her refined style make these "monuments to interruption," a phrase she wrote in description of Virginia Woolf's essays and reviews, an important record of her literary standards and special interests. They show as well how book reviewing consumed a large measure of creative time that she customarily devoted to fiction writing. Placed beside her authoritative critical essays, this volume enhances Welty's considerable literary stature and completes the image of Eudora Welty as a consummate woman of letters. Eudora Welty, (1909-2001), was one of the twentieth-century's most critically- acclaimed authors and a master of the short story. Her literary canon encompasses works of fiction and nonfiction, including essays, book reviews, and a best-selling memoir. Pearl Amelia McHaney is associate professor of English at Georgia State University.