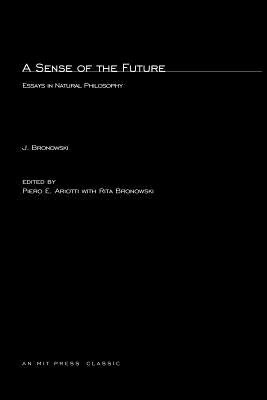 A Sense of the Future: Essays in Natural Philosophy (The MIT Press)

price inside, in ink - some shelfwear but still NICE!

Jacob Bronowski truly educated an enormous number of members of that diffuse population usually referred to, with a hint of condescension, as educated laymen through his widely shared television series on the concepts of science and through such highly regarded books as The Identity of Man and The Ascent of Man. This volume extends the process to a further level of insight, and it may be more than suggestive that its final essay is entitled The Fulfillment of Man. Bronowski was an extraordinary teacher precisely because he did not condescend to his audience. He did not talk down to them; he knew how to talk them up to something near his own level, however briefly. He felt that if human beings are taken seriously, they can be led to respond to serious and difficult subjects that relate to the deepest aspects of nature, both beyond and within themselves.A Sense of the Future succeeds brilliantly in this respect, in part because it is a collection of essays that can be read independently as self-contained, delimited presentations; and in part because the book is more than the sum of these individual essays--it is a unified whole in which Bronowski's most abiding concerns are interrelated, juxtaposed, and tested for consistency in various intellectual contexts. The major unifying theme of the work is the intensely creative and human nature of the scientific enterprise--its kinship, at the highest levels of individual achievement, with comparable manifestations of the artistic imagination, and its ethical imperatives, evolved within the community of scientists over the centuries, which both embody and forge the values of civilized life at large. Still, the book's diversity of topics is as striking as the unity of its aim. Among the subjects within the realm of Bronowski's mind that are presented here are the limitations of formal logic and experimental methods, the epistemology of science, the distinctive nature of human language and the human mind, and the bases of biological and cultural evolution.Bronowski also contrasts the findings of science as the here and now of man's understanding with the ongoing activity of science as the open-ended search for truth, and he undertakes to demonstrate that the factual, individual is and the ethical, societal ought can be derived each from the other. A mathematician by training, Bronowski published poetry as well as books on literature and intellectual history. In addition to those mentioned above, The Common Sense of Science and Science and Human Values are among the most widely read of his books. Before his death in 1974, he was for many years a Senior Fellow at the Salk Institute for Biological Studies, where his formal area of research was concerned with the questions of human specificity and uniqueness. Clearly, his interests ranged far beyond this area, and in many directions.

Title: A Sense of the Future: Essays in Natural Philosophy (The MIT Press)

A Sense of the Future: Essays in Natural Philosophy (The MIT Press)