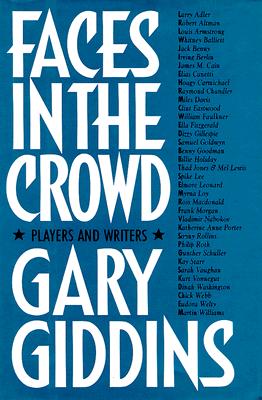 Faces in the Crowd: Players and Writers

As an essayist and Village Voice columnist, Gary Giddins is widely known as a preeminent jazz writer. Walter Clemons, writing in Newsweek, hailed him as "the best jazz critic now at work," praising his "elegant prose" and "encyclopedic knowledge." Yet he has won a devoted audience for his reflections on popular culture, books, and movies as well--including a marvelous essay on Jack Benny that Gay Talese selected for Best American Essays of 1987. In Faces in the Crowd, Giddins once again demonstrates his graceful style and sharp wit in a brilliant collection of critiques, assessments, and profiles of major figures in the culture of our century.
Faces in the Crowd is a virtual Gary Giddins reader, a potent collection of his finest writing from the last fifteen years. Ranging from fond reflection to interview-and-commentary to close critical analysis, Giddins explores the achievements of thirty-seven artists: show people, divas, musicians, and writers, ranging from Irving Berlin to Spike Lee, Billie Holliday to Kay Starr, Louis Armstrong to Miles Davis, Elias Canetti to Philip Roth. Through every essay, his observations are sharp, his reactions honest, his judgments right on target. In "This Guy Wouldn't Give You the Parsely off his Fish," for example, he shows how Jack Benny revolutionized comedy, creating a memorable character who was the butt of every joke. He takes a new look at the great Dinah Washington, remarking that "few performers have taken a stage or stormed off one with quite the noblesse oblige of the Queen." Giddins also offers a fresh assessment of James M. Cain and other masters of hard-boiled detective fiction, and he delivers an aggressive critique of the liberties academics have taken with such classic texts as Faulkner's The Sound and the Fury. Along the way, he reveals how he uncovered the true birthdate of Louis Armstrong; chats with Clint Eastwood about Charlie Parker; and exposes the curious plagiarism of Katherine Anne Porter by her own biographer. And of course, he writes with power and authority on the great jazz musicians, providing an original perspective on Benny Goodman, tracking the evolving musical adventures of Sonny Rollins, and offering a musicological study of two Dizzy Gillespie solos separated by forty years.
Pete Hamill has written, "Nobody writes with greater authority about American music than Gary Giddins," and Ken Tucker has called him "the John Updike of jazz criticism." In this provocative and immensely entertaining collection, Giddins shows why he has become one of the most influential critics of his generation.

Title: Faces in the Crowd: Players and Writers

Faces in the Crowd: Players and Writers