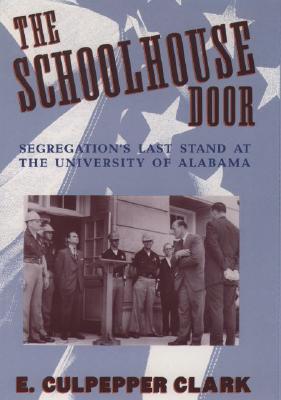 The Schoolhouse Door: Segregation's Last Stand at the University of Alabama

On June 11, 1963, in a dramatic gesture that caught the nation's attention, Governor George Wallace physically blocked the entrance to Foster Auditorium on the University of Alabama's campus. His intent was to defy Attorney General Nicholas Katzenbach, sent on behalf of the Kennedy administration to force Alabama to accept court-ordered desegregation. After a tense confrontation, President Kennedy federalized the Alabama National Guard and Wallace backed down, allowing Vivian Malone and James Hood to become the first African Americans to enroll successfully at their state's flagship university. That night, John F. Kennedy went on television to declare civil rights a "moral issue" and to commit his administration to this cause. That same night, Medgar Evers was shot dead.
In The Schoolhouse Door, E. Culpepper Clark provides a riveting account of the events that led to Wallace's historic stand, tracing a tangle of intrigue and resistance that stretched from the 1940s, when the university rejected black applicants outright, to the post-Brown v. Board of Education era. We are there in July 1955 when Thurgood Marshall and lawyers at the NAACP Legal Defense Fund win for Autherine Lucy and "all similarly situated" the right to enroll at the university. We are in the car with Lucy in February 1956 as university officials escort her to class, shielding her from a mob jeering "Lynch the nigger," "Keep 'Bama white," and "hit the nigger whore." (After only three days, these demonstrations resulted in Lucy's expulsion.) Clark exposes the many means, including threats and intimidation, used by university and state officials to discourage black applicants following the Lucy episode. And he explains how University of Alabama president Frank Anthony Rose eventually cooperated with the Kennedy administration to ensure a smooth transition toward desegregation. We also witness Robert Kennedy's remarkable face-to-face plea for Wallace's cooperation and the governor's adamant refusal: "I will never submit voluntarily to any integration in a school system in Alabama." As Clark writes, Wallace's carefully orchestrated surrender would leave the forces of white supremacy free to fight another day. And the Kennedys' public embrace of the civil rights movement would set in motion a political transformation that changed the presidential base of the Democratic party for the next thirty years.
In these pages, full of courageous black applicants, fist-shaking demonstrators, and powerful politicians, Clark captures the dramatic confrontations that transformed the University of Alabama into a proving ground for the civil rights movement and gave the nation unforgettable symbols for its struggle to achieve racial justice.

Title: The Schoolhouse Door: Segregation's Last Stand at the University of Alabama

The Schoolhouse Door: Segregation's Last Stand at the University of Alabama