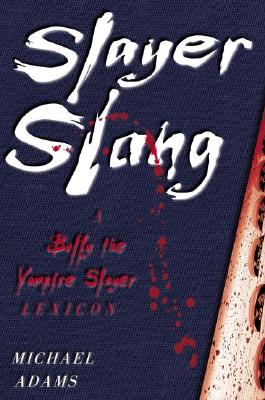 In its seven years on television, Buffy the Vampire Slayer has earned critical acclaim and a massive cult following among teen viewers. One of the most distinguishing features of the program is the innovative way the show's writers play with language: fabricating new words, morphing existing ones, and throwing usage on its head. The result has been a strikingly resonant lexicon that reflects the power of both youth culture and television in the evolution of American slang. Using the show to illustrate how new slang is formed, transformed, and transmitted, Slayer Slang is one of those rare books that combines a serious explanation of a pop culture phenomena with an engrossing read for fans of the show, word geeks, and language professionals. Michael Adams begins his book with a synopsis of the program's history and a defense of ephemeral language. He then moves to the main body of the work: a detailed glossary of slayer slang, annotated with actual dialogue and recorded the style accepted by the American Dialect Society. The book concludes with a bibliography and a lengthy index, a guide to sources (novels based on the show, magazine articles about the show, and language culled from the official posting board) and an appendix of slang-making suffixes. Introduced by Jane Espenson, one of the show's most inventive writers (and herself a linguist), Slayer Slang offers a quintessential example of contemporary youth culture serving as a vehicle for slang.
In the tradition of The Physics of Star Trek, Slayer Slang is one of those rare books that offers a serious examination a TV cult phenomenon appealing to fans and thinkers alike.
A few examples from the Slayer Slang glossary:
bitca n AHD4 bitch n in sense 2.a ] a] Bitch 1997 Sep 15 Whedon When She Was Bad " Willow: ] 'I mean, why else would she be acting like such a b-i-t-c-h?' Giles: ] 'Willow, I think we're all a little old to be spelling things out.' Xander: ] 'A bitca?'"
break and enterish adj AHD4 sv breaking and entering n ] -ish suff in sense 2.a] Suitable for crime 1999 Mar 16 Petrie Enemies "I'll go home and stock up on weapons, slip into something a little more break and enterish." B]
carbon-dated adj fr. AHD4 carbondating ] -ed] Very out of date 1997 Mar 10 Whedon Welcome to the Hellmouth " Buffy: ] 'Deal with that outfit for a moment.' Giles: ] 'It's dated?' Buffy: ] 'It's carbon-dated.'"
cuddle-monkey n AHD4 cuddle v ] monkey n in sense 2, by analogy fr. RHHDAS (also DAS3 and NTC) sv cuddle bunny 'an affectionate, passionate, or sexually attractive young woman'] Male lover 1998 Feb 10 Noxon Bewitched, Bothered, and Bewildered "Every woman in Sunnydale wants to make me her cuddle-monkey." X]