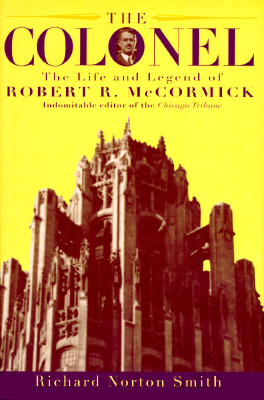 For most of his varied and colorful career, Colonel Robert R. McCormick was the self-proclaimed emperor of "Chicagoland," a Middle America of his own imagination, forever at odds with the alien East and the flaky West. From the 1920s through the mid-1950s, he was editor and owner of the Chicago Tribune, a joyously combative conservative broadsheet that under his leadership grew to become the most widely read full-size daily in the United States. To admirers he was the scourge of bleeding-heart liberals, an emblem of the Old Order in the age of the New Deal. To detractors he was a half-crazed demagogue whose personal exploitation of a powerful news medium was a flagrant abuse of the public trust. In fact, he was all this -- and more. Published to coincide with the 150th anniversary of the Tribune, The Colonel is the first biography to draw on McCormick's personal papers. Richard Norton Smith has written a vivid, candid, sympathetic life of an American original, a lifelong controversialist whose outspoken views, for better and for worse, shaped the political temper of his times. "I was determined to lead a great life, an exotic life," McCormick wrote, and for once he was guilty of understatement. Patterning himself on his grandfather Joseph Medill, he found fame as a municipal reformer, cleaning up Chicago's water supply. During World War I, he was the sole American correspondent to accompany the Russian Army; later, as an officer of the U.S. First Division, he fought with distinction in the Battle of Cantigny. He was a strident isolationist whose hobby was military strategy, an implacable anglophobe who adored a good fox hunt, a finger-pointing moralist whose private life bordered on thescandalous. As owner-editor of the Tribune, he was a ruthless competitor, yet he was also a First Amendment absolutist who effectively, even heroically, defended the press from government coercion. At the height of his power, he oversaw an empire whose holdings included not only the Tribune but also the New York Daily News, the Washington Times-Herald, a large chunk of Canada, and "the most beautiful office building in the world," Chicago's Tribune Tower. Richard Norton Smith tells McCormick's story with humor, verve, and an eagle eye for revealing detail. Here is McCormick exposing the fiscal crimes of Mayor "Big Bill" Thompson, investigating the gangland murder of a corrupt reporter, and holding Henry Ford up to ridicule in "the trial of the century." Here is McCormick at his most indomitable, at war with his nemesis, FDR, who sought unsuccessfully to indict him for treason. The Colonel is a story by turns amazing, amusing, and appalling. As Smith remarks of McCormick's Tribune, it will provoke its readers "to spasms of outrage punctuated by laughter."