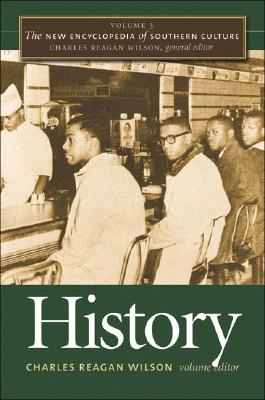 some shelf wear but still nice

Providing a chronological and interpretive spine to the twenty-four volumes of The New Encyclopedia of Southern Culture, this volume broadly surveys history in the American South from the Paleoindian period (approximately 8000 B.C.E.) to the present. In 118 essays, contributors cover the turbulent past of the region that has witnessed frequent racial conflict, a bloody Civil War fought and lost on its soil, massive in- and out-migration, major economic transformations, and a civil rights movement that brought fundamental change to the social order.

Charles Reagan Wilson's overview essay examines the evolution of southern history and the way our understanding of southern culture has unfolded over time and in response to a variety of events and social forces--not just as the opposite of the North but also in the larger context of the Atlantic World. Longer thematic essays cover major eras and events, such as early settlement, slave culture, Reconstruction, the New Deal, and the rise of the New South. Brief topical entries cover individuals--including figures from the Civil War, the civil rights movement, and twentieth-century politics--and organizations such as the Southern Christian Leadership Conference, Daughters of the Confederacy, and Citizens' Councils, among others. Together, these essays offer a sweeping reference to the rich history of the region.