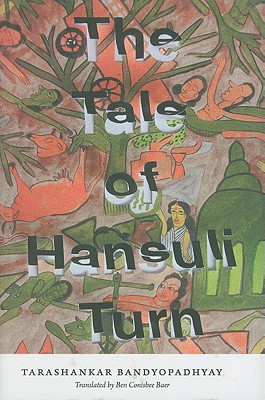 The Tale of Hansuli Turn

A terrifying sound disturbs the peace of Hansuli Turn, a forest village in Bengal, and the community splits as to its meaning. Does it herald the apocalyptic departure of the gods or is there a more rational explanation? The Kahars, inhabitants of Hansuli Turn, belong to an untouchable "criminal tribe" soon to be epically transformed by the effects of World War II and India's independence movement. Their headman, Bonwari, upholds the ethics of an older time, but his fragile philosophy proves no match for the overpowering machines of war. As Bonwari and the village elders come to believe the gods have abandoned them, younger villagers led by the rebel Karali look for other meanings and a different way of life.

As the two factions fight, codes of authority, religion, sex, and society begin to break down, and amid deadly conflict and natural disaster, Karali seizes his chance to change his people's future. Sympathetic to the desires of both older and younger generations, Tarashankar Bandyopadhyay depicts a difficult transition in which a marginal caste fragments and mutates under the pressure of local and global forces. The novel's handling of the language of this rural society sets it apart from other works of its time, while the village's struggles anticipate the dilemmas of rural development, ecological and economic exploitation, and dalit militancy that would occupy the center of India's post-Independence politics. Negotiating the colonial depredations of the 1939-45 war and the oppressions of an agrarian caste system, the Kahars both fear and desire the consequences of a revolutionized society and the loss of their culture within it. Lyrically rendered by one of India's great novelists, this story of one people's plight dramatizes the anxieties of a nation and the resistance of some to further marginalization.

Title: The Tale of Hansuli Turn

The Tale of Hansuli Turn