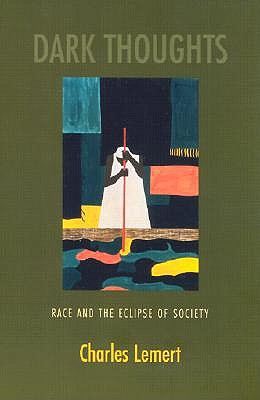 Dark Thoughts: Race and the Eclipse of Society

In Dark Thoughts, eminent sociologist Charles Lemert dares to say, and explain, what everyone already knows - that the modern world was built on the need of white people to pretend they are not as dark as the next person.

Delving poignantly into the history and literature of domination, Lemert retells key moments of the twentieth-century by profiling figures like W.E.B. DuBois, Charlotte Perkins Gilman, Anna Julia Cooper, Nella Larson, Malcolm X, and Muhammad Ali. In a rare and unflinching look at his own complicated history, Lemert also explores his own racism, his struggle with the suicide of his oldest son, as well as growing up as the virtual son of a black mother and his life now as the real father of an African-American daughter. Dark Thoughts speaks to the most urgent social issues at the beginning of the twenty-first century: race relations, multiculturalism, and social justice.

Title: Dark Thoughts: Race and the Eclipse of Society

Dark Thoughts: Race and the Eclipse of Society