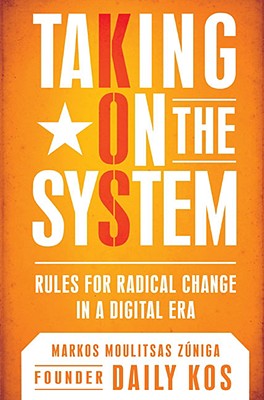 Taking On the System: Rules for Radical Change in a Digital Era

As founder of one of the most influential political blogs, DailyKos, Markos Moulitsas ZAniga establishes the fundamental laws that govern todayas new era of digital activism. The Sixties are overaand the rules of power have been transformed. In order to change the world one needs to know how to manipulate the media, not just march in the streets. Markos Moulitsas ZAniga, otherwise known as aKos, a is todayas symbol of digital activism, giving a voice to everyday people. In Taking on the System, Kos has taken a cue from his revolutionary predecessoras doctrine, Saul Alinksyas Alinskyas Rules for Radicals, and places this epic hand-book in todayas digital era, empowering every American to make a difference in the 21st century. As founder of the largest political blog in the nation, Kos knows how itas done, because heas done it with tremendous success. In Taking on the System, he shares practical guidelines on how grassroots movements can thrive in the age of global information, while referencing historical and present examples of the tragedy caused without those actions. The walls between the people and the powerathe so-called rabble and the so-called eliteaare being torn down by technology, and a new army of amateurs are storming the barriers to effect political, cultural, and environmental transformation. Readers will come to understand how they too can change the world.

Title: Taking On the System: Rules for Radical Change in a Digital Era

Taking On the System: Rules for Radical Change in a Digital Era