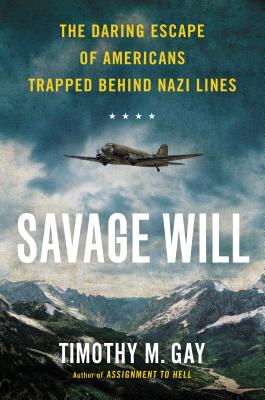 Savage Will: The Daring Escape of Americans Trapped Behind Nazi Lines

Savage Will brings to life a remarkable story of perseverance, heroism, and survival: the true tale of the American medics and nurses who endured two months in Nazi-occupied Albania--and the fearless citizens and Allied intelligence officers who risked all to save them.
On a cold morning in war-ravaged Sicily in 1943, men and women of the 807th Medical Air Evacuation Squadron boarded a routine flight to the Italian mainland to care for wounded soldiers. En route, their plane became lost in storm clouds looming over the Adriatic Sea, drifted hundreds of miles off course, and crash-landed in remote mountainous Albania.
Stranded without proper winter clothing or weapons, the Americans were trapped hundreds blizzard-plagued miles from Allied lines in a country torn apart by rival bands of pro- and anti-German guerrillas.
What followed is the most thrilling untold story of World War II--a saga that would ensnare a cast of hundreds, from President Roosevelt and top Allied intelligence officials to a host of brave Albanian Resistance fighters, the British and U.S. Mediterranean air forces, and the gritty officers sent behind enemy lines to rescue them: a dashing English lieutenant and a tenacious American captain.
Hunted by German soldiers, the American castaways were forced to rely on what one survivor called their "savage will" to elude their enemy and ultimately find their way to freedom. Savage Will is a testament to a generation who defied all odds.

Title: Savage Will: The Daring Escape of Americans Trapped Behind Nazi Lines

Savage Will: The Daring Escape of Americans Trapped Behind Nazi Lines