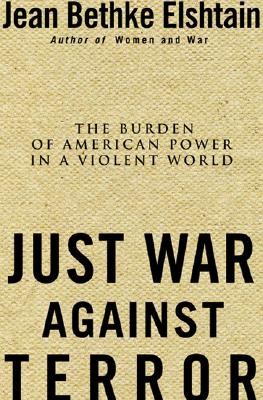 Just War Against Terror: Ethics And The Burden Of American Power In A Violent World

Jean Bethke Elshtain has been hailed as one of this country's most influential public intellectuals. Michael Walzer called her award-winning Democracy on Trial "the work of a truly independent, deeply serious, politically engaged, and wonderfully provocative political theorist." These rare qualities are once again vividly in force in Just War Against Terrorism.In this hard-hitting book, Elshtain advocates "just war" in times of crisis and mounts a reasoned attack against the defenses of terrorism that have abounded since September 11. Arguing that those who defend terrorist acts on the basis of their "root causes"-poverty, political conflict, infringement of Western values on Islamic culture-minimize the responsibility of terrorists, Elshtain interrogates the sources of root-cause reasoning and traces them to a fundamental misunderstanding of the Judeo-Christian ethic of war and peace, compounded by "faux-pacifist" positions and retro-sixties cultural romance. Why, she asks, are pacifist alternatives so palpably inadequate? So implausible? Often so irresponsible? How indeed does one respond to acts of terror that constitute an act of war perpetrated against one's own citizenry? Advocating an ethic of responsibility, Elshtain forces us to ask tough questions not only about the nature of Islam but also about ourselves.Elegantly written and forcefully argued, Just War Against Terror offers a badly needed and refreshingly clear look at responses to terror in the modern world.

Title: Just War Against Terror: Ethics And The Burden Of American Power In A Violent World

Just War Against Terror: Ethics And The Burden Of American Power In A Violent World