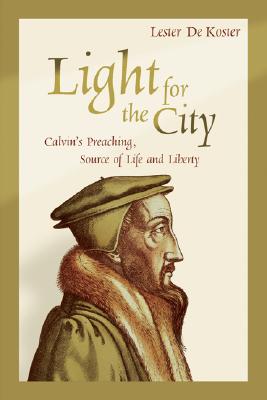 Light for the City: Calvin's Preaching, Source of Life and Liberty

"Light of the City" introduces readers to a unique view of John Calvin's life and thought, one that not only challenges past readings of Calvin but also seeks to reinvigorate the role of preaching as proclamation for modern civic life.

According to Lester DeKoster, the doctrine of predestination as preached by Calvin makes building the kingdom of God, rather than evangelism, the sole and highest calling of Christians. Calvin's indifference to missions was rooted in his understanding that predestination leaves evangelism with nothing to give away; instead, daily labor on behalf of God's kingdom is the central act of divine worship.

Calvin's preaching, his "Institutes of the Christian Religion," and his leadership of the church and civic government in Geneva were each, DeKoster maintains, directed toward establishing God's kingdom on earth. Furthermore, Western democracy as envisioned by Thomas Jefferson and others is a direct result of such Word-inspired civil government. Properly understanding Scripture as a dynamic creative Agent of the City means that faithfully preaching today, just as in Calvin's day, will continue to dramatically evoke the City as God's kingdom on earth.

Lester DeKoster's style reminds me of Thomas Carlyle. He takes the English language and -- as only a master of prose can do -- transforms that language into something powerful and imposing. . . . This book will prove to be an enduring monument, not only in the field of Calvin studies but far beyond that.
-- John Richard de Witt
First Presbyterian Church, Columbia, South Carolina

Title: Light for the City: Calvin's Preaching, Source of Life and Liberty

Light for the City: Calvin's Preaching, Source of Life and Liberty