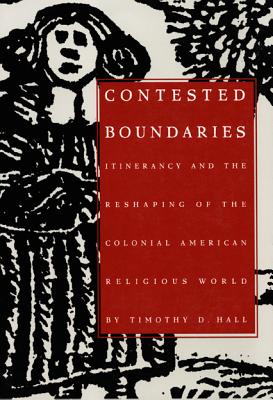 Contested Boundaries: Itinerancy and the Reshaping of the Colonial American Religious World

The First Great Awakening in eighteenth-century America challenged the institutional structures and raised the consciousness of colonial Americans. These revivals gave rise to the practice of itinerancy in which ministers and laypeople left their own communities to preach across the countryside. In Contested Boundaries, Timothy D. Hall argues that the Awakening was largely defined by the ensuing debate over itinerancy. Drawing on recent scholarship in cultural and social anthropology, cultural studies, and eighteenth-century religion, he reveals at the center of this debate the itinerant preacher as a catalyst for dramatic change in the religious practice and social order of the New World.
This book expands our understanding of evangelical itinerancy in the 1740s by viewing it within the context of Britain's expanding commercial empire. As pro- and anti-revivalists tried to shape a burgeoning transatlantic consumer society, the itinerancy of the Great Awakening appears here as a forceful challenge to contemporary assumptions about the place of individuals within their social world and the role of educated leaders as regulators of communication, order, and change. The most celebrated of these itinerants was George Whitefield, an English minister who made unprecedented tours through the colonies. According to Hall, the activities of the itinerants, including Whitefield, encouraged in the colonists an openness beyond local boundaries to an expanding array of choices for belief and behavior in an increasingly mobile and pluralistic society. In the process, it forged a new model of the church and its social world.
As a response to and a source of dynamic social change, itinerancy in Hall's powerful account provides a prism for viewing anew the worldly and otherworldly transformations of colonial society. Contested Boundaries will be of interest to students and scholars of colonial American history, religious studies, and cultural and social anthropology.

Title: Contested Boundaries: Itinerancy and the Reshaping of the Colonial American Religious World

Contested Boundaries: Itinerancy and the Reshaping of the Colonial American Religious World