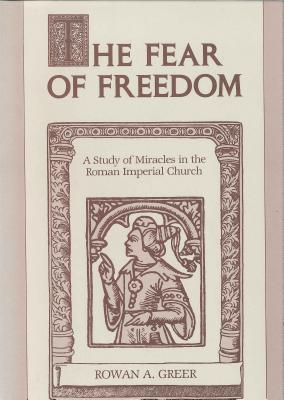 The Fear of Freedom: A Study of Miracles in the Roman Imperial Church

By "the fear of freedom" Greer means the unconscious flight from the heavy burden of individual choice an open society lays upon its members. The miraculous represents a heavenly power brought down to earth and tied to the life of the community. Understanding how miracles were perceived in the late antiquity requires us to put aside the notion of a miracle as the violation of the natural order. "Miracles" for the church fathers refers to anything that evokes wonder. Rowan Greer is not concerned with conclusions about the truth or falsity of the miracles reported in the ancient sources. He is concerned with how the miracle stories shaped the way people understood Christianity in the fourth and fifth centuries.

Once the Church gained the predominance in the Empire as part of the Constantinian revolution, most Christians thought that a new Christian commonwealth was in the making. The miracles associated with the cult of the saints (the martyrs and their relics) in the Christian Empire were part of this sacralization. In the Roman imperial church we find a tension between the Christian message, which revolved around virtue and the individual, and corporate piety that focused upon the empowering of the people of God.

With Augustine we find Christian Platonism transformed into a "new theology" far more congruent with the corporate poetry that had by then developed. An emphasis upon grace and upon God's sovereignty fits a preoccupation with miracles better than the old emphasis upon human freedom and virtue and sets the stages for the Western Middle Ages and the cult of the saints, organized and made central to Christian piety.

From a study of Roman imperial Christianity before the collapse of the West we discover the tendency to substitute one kind of freedom for another. Freedom as the capacity of human beings to choose the good does not, of course, disappear, but on the whole it is made subordinate to notions of God's sovereign grace and even to an insistence upon the authority of the church.

Title: The Fear of Freedom: A Study of Miracles in the Roman Imperial Church

The Fear of Freedom: A Study of Miracles in the Roman Imperial Church