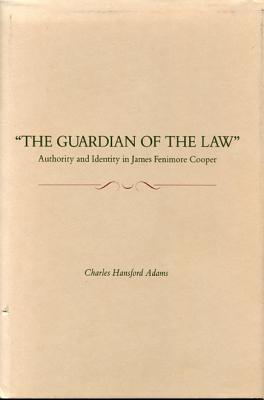 Guardian of the Law: Authority and Identity in James Fenimore Cooper

The Guardian of the Law treats Cooper's use of legal drama in novels from every phase of his career in the effort to find some satisfactory balance between the claims of authority and identity. The failure of this effort, Charles Adams argues, may be attributed to his democratic culture's ambivalence about authority, as well as to Cooper's own deeply divided feelings about the self, social order, and the meaning of American history. Adams explores Cooper's handling of what is arguably the most important of these issues: the uncertain prerogatives of authority in a nation defined by the rhetoric of individuality.

Like many of his contemporaries, Cooper looked to the law as a focal point for his meditations on this theme. Antebellum Americans intensely debated the grounds of legitimate authority in a democracy, and their debates often turned on the proper role of law in the developing republic. The book examines this controversy and Cooper's often energetic participation in it, but concentrates on his fictional explorations of law. In the novels, the law's social power represented by its elaborate rituals, specialized language, and paternalistic organization provides Cooper with a rich metaphor for the moral, psychological, and historical forms of authority that condition individual efforts to define and assert identity.

Title: Guardian of the Law: Authority and Identity in James Fenimore Cooper

Guardian of the Law: Authority and Identity in James Fenimore Cooper